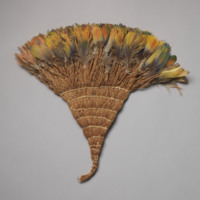 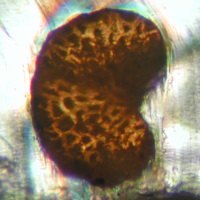 Feathers from the Amazonian rainforest were prized above all else, and must be included in the idea of qumpi, precious fiberwork. Bringing them over the mountains to the coast, where such fans as this one were preserved, also invokes another key Quechua concept, tinku, or the bringing together of disparate parts to create new wholes. The braids are made from Furcraea andina, a succulent resembling agave but with drooping, greenish leaves; its tough strands can be peeled off in strips, dried, and woven or braided. The braids were stitched across to create the fan’s handle using local coastal cotton thread. Thus, three distinct eco-zones combine to form this useful yet aesthetic fan.

Because modern Amazonian peoples continue to make all kinds of feather objects, there can be confusion between modern and well-preserved ancient ones. Carbon-14 testing assigned a date of ca. 1300 AD to a sample of the plant fiber, indicating that it was indeed created during the later Chimú Empire.

The feathers in this fan are tied with braided and twisted cord made of plant fiber. Conservator Ashley Jehle examined small transverse and cross-section samples of the plant fibers under transmitted light using a polarizing light microscope. These samples were compared with a known sample of Furcraea andina. The overall kidney-bean shape of the cross-section as well as the shape and arrangement of the vascular bundles suggests identification as Furcraea andina or a similar succulent species. Although slightly richer in color, the plant fibers from the feather fan appear similar to the thin, round, glossy fibers of the single khipu strand, also identified as Furcraea andina. Jehle sent approximately 0.01g of plant fiber from the feather fan to The Center for Applied Isotope Studies at the University of Georgia, Athens for radiocarbon (C-14) analysis by accelerator mass spectrometry (AMS) and stable isotope ratio analysis. Dr. Alexander Cherkinsky reported the calibrated age between 1282-1384 CE.