This exhibition and catalogue feature indigenous textiles from the ancient and modern Andes, as well as from the Maya of modern Guatemala and the

Guna of modern Panamá. Looms and tools are also included to show the old and new ways cloth has been made by these varied indigenous American peoples.

Textiles have always been important throughout the indigenous cultures of the Americas, meaning the peoples who originally inhabited these continents and their descendants that consciously maintain ties to their identity. Yet large quantities of ancient cloth survive only from the dry Andean coast. What is known of the pre-Hispanic Maya comes from depictions of sumptuous clothing in their sculptures and paintings, and their many descendants continue to weave many of the same garment types, such as the rectangular blouse or

The dramatic changes that have taken place since 1492 can be seen in the textile record as well. The European-style foot or treadle loom introduced mass-produced cloth which is cut and sometimes tailored. In Panamá, the Guna embraced European scissors and machine-made cloth to make exuberant blouse panels originally based on body paint patterns, but including truly global subject matter today.

In Andean fiber arts, the many ancient techniques gave way to only a few after the Spanish arrival, although the overall quality of spinning, dyeing, and weaving has remained impressively high. The ancient Andean pieces include the

khipu or Inka knot writing device, showing that textiles served as a form of written communication in the past.

Any medium can be used to communicate and record information in what can be called “writing.” Stone tablets, clay cylinders, papyrus and paint, paper and ink have been used in different times and places in world history, but textiles can also perform the same vital functions, especially in the indigenous Americas. Knotted strings, called khipu, perform the same functions as other modes: they record, preserve, and transmit ideas and information to those who can read them. Around 850 khipu are preserved and were quite permanent due to the extreme aridity of the Andean coastal region.

The Inka—the last and largest empire dominant over most of South America before the European invasions— used colored, knotted threads to write. Three types of khipu are represented in this exhibition (a polychrome khipu, a single-strand khipu, and an early colonial khipu). In general, they have a horizontal, thicker cord from which pendant cords hang vertically. One unusual khipu-like object adds to our conception of what a single knotted strand made in plant fiber might have meant. In Colonial drawings, imperial accountants hold out a khipu for the ruler to know what was in his storehouses. 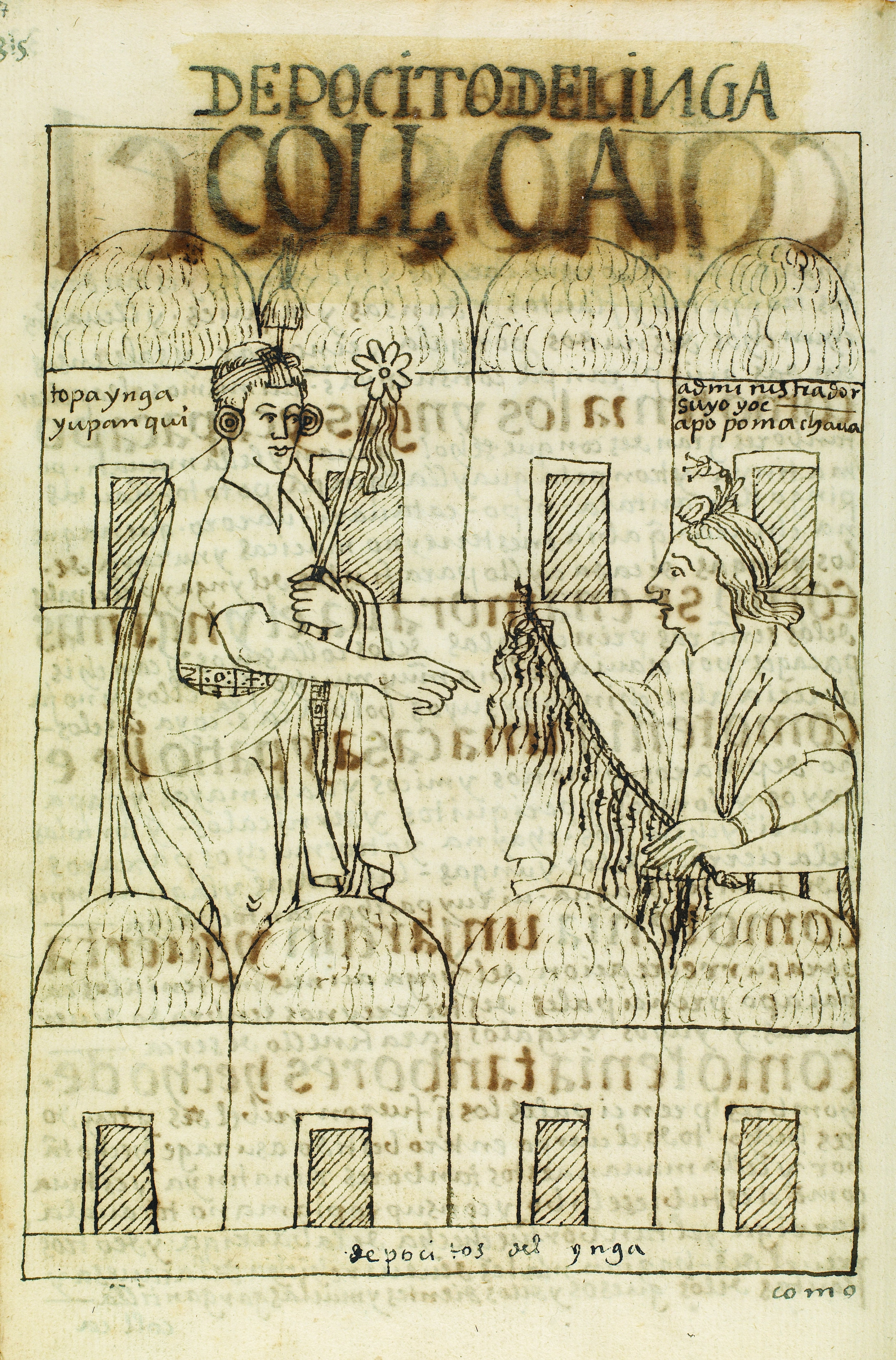 The khipu is a kind of tactile writing: the reader actually feels the knots and the direction in which the threads were spun, and looks at the colors of the threads, their spacing, and their order from left to right.

When the Spanish invaded and began colonizing the Americas in the 16th century, they introduced the alphanumeric system of writing. This new, exotic way of communicating with A, B, C’s and 1, 2, 3’s was gradually embraced, mostly out of necessity; Inka knot-writing was outlawed by the colonizers in 1581. The Spanish did not know how to “read” khipu and so considered them subversive. In turn, the indigenous peoples of the Americas did not know how to read European script, at least right away. Yet Western-style writing had obvious political power and was therefore incorporated into all media, including textiles.

Some contemporary Panamanian blouse panels (see here and here) and Maya tie-dyed cloths (here, here, and here) show that alphabetic writing has been appropriated by the various peoples who were here before the Europeans. While the foreign letters may still not be used in the ways they were intended (one Panamanian piece reverses the sacred letters of Jesus’ name, “IHS”), the new way of recording information has been (marginally) accepted. It may even be celebrated, as in the Maya pieces, which show incredible virtuosity in writing peoples’ names in pre-planned dyed strings. Using Western-style letters for religious imagery and in the most difficult weaving techniques shows the prestige given to new kinds of writing in threads.

Read the introductory essay to this exhibition, "Passing the Flame: Some Thoughts on Tradition and Change in Indigenous American Textiles."

Continue through the exhibition to Spinning and Weaving Tools.

A great many people contributed to the creation of the exhibition and this catalogue Threads of Time: Tradition and Change in Indigenous American Textiles.  We want to thank all of the following very sincerely for their efforts and expertise.

Director Bonnie Speed and Associate Director Catherine Howett Smith supported this project from the beginning, for which we are grateful. Fundraising and events helped make it possible, thanks to Gail Habif, Jennifer Long, and Kate Stanton. Public relations by Priyanka Sinha are very much appreciated.

For conservation our thanks for years of work go to Patricia Ewer, Renee A. Stein, and Nysa Loudon. This exhibition has been made possible through generous support from Bank of America and the Bank of America Art Conservation Project.

For the online catalogue, we acknowledge the invaluable work of curatorial assistant Liz Caris and help by Shelley A. Burian, who both also contributed essays, as did Dr. Dr. Dorie Reents-Budet. Ideas from graduate students Rachel Patt, Julianne Cheng, Annie McEwen, Jennifer Butterworth and undergraduate Xiao Tan were especially helpful as well. Funding for the digital catalogue provided by the Emory Center for Digital Scholarship. The leadership of Joanna C. Mundy and Sara Palmer is especially appreciated.

The Exhibition Design team of Joseph Gargasz, Bruce Raper, and Caleb Plattner made the show sing. Graphic design of the labels by Robert Evans at Times Three is much appreciated, as always. We want to heartily thank Ms. Georgia Clark for her drawings and maps.

Special thanks to the Bolivian weavers Mayde Huamán and Ramona Contreras for participating in filmed interviews and translation work by Rita Clavijo.