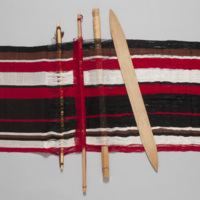 This modern Maya backstrap loom has most of its original parts, except for the belt (fastened to the lower bar that goes around the weaver’s waist) and a new rope added to the top bar and affixed onto a tree branch or a house post. Tension is created by the seated weaver leaning back against her belt. Warps (here the red, brown, and white threads that make vertical stripes) must be taut so that the wefts can be inserted. Here there are more warps, very close together, than wefts so only the warps can be seen.

In the middle of the loom are a number of stick tools that assist in adding the wefts. The one with the red thread loops is called the heddle rod and the loops are known as heddles. Each loop hooks around a warp, every other warp to be exact. When the weaver pulls up on the heddle rod, the heddles pull up their warps and an opening, called a shed, is made for the weft to pass through and all the way across the loom.

If the heddle rod pulled up the odd-numbered warps, then another means is necessary to pull up the even-numbered ones. This other shed is accomplished with the bar that is behind the heddle, toward the top of the loom. It has been carefully threaded to pick up the other warps. The weaver brings this bar near the heddle rod and lets the heddle loops drop loose so the new set of threads is pushed up slightly between them. Then the flat stick, in front of the heddle rod and toward the woven part and the bottom of the loom, can be threaded in to hold open that new shed. The weft goes back the other way. These two motions create the “over-under” of a basic textile, known as “plain weave.”