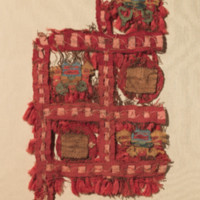 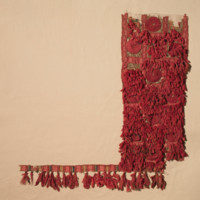 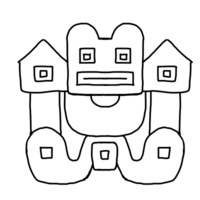 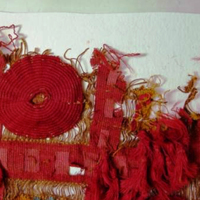 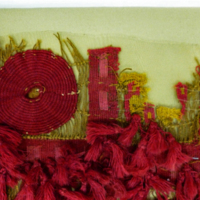 The two fragments of this tunic from the far north coast of Perú are shown with the larger remaining portion facing out and the smaller one showing the side worn toward the wearer’s body. In other words, the whole tunic was covered with red tassels that almost entirely obscured the tiny woven multicolor figures (see the drawing above). This conscious choice, made around a thousand years ago on the coast of Perú, corresponds to the Quechua concept of ukhu or the hidden potentially revealed.

The deliberate hiding, and the implication that the art therefore does not necessarily cater to a human audience, is central to traditional Andean thought. In the religious orientation known as shamanism, which was embraced by all Native Americans, the vitally true visions experienced by the spiritual leaders are hidden from others; insight comes from other cosmic realms. Spirits play a key role in shamanic belief and so making everything perceptually available for humans is not paramount.

This tunic also celebrated an immense wealth of scarlet red thread, laboriously dyed from tens of thousands of crushed cochineal beetles. Under its expanse, in a further act of conspicuous consumption, the figures are woven of high-prestige indigo blue and other colors. To have so much time, access to the finest dyes and weavers, and to withhold it from others is a true act of power, the basis of ukhu.

The red tasseled fragment has a very complex weave structure, with tapestry designs hidden by the added tassels. The grid pattern and floating disks created many openings (slits) in the tapestry as well as repeated areas of exposed warps. This complex structure is vulnerable and requires support for display and study. Yet, it is crucial to be able to examine the reverse, so the object could not be fully stitched to a secondary support. Instead, Patricia Ewer stitched the very fragile tassled textile to a sheer nylon backing, stabilizing the structure while also allowing the back to be examined. This lined fragment was then placed onto a fabric-wrapped padded support for display at a slight angle inside the exhibition case.