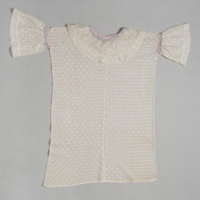 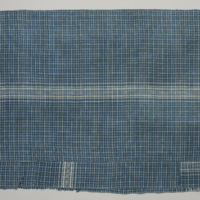 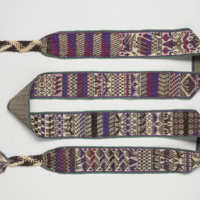 This wedding ensemble from early 20th century Totonicapán consists of a white huipíl (blouse), a blue corte (skirt), and a colorful faja (belt). Some white-on-white patterning is common among festive clothing, particularly wedding ensembles. This less traditional huipíl is pure white and its lace and ruffles indicate a strong Spanish influence, as does the extensive floral design. Although the lace was most likely created by a European and imported to Guatemala, the repeated quatrefoil flower motifs would have been familiar to the wearer from huipíl motifs reaching back to the ancient Maya era.

Four-part flowers connect past and present as they are the most prevalent design on modern wedding blouses as well as on the surviving representations of ancient Maya huipíles on ceramics and in stone. In traditional beliefs, the shape may be associated with the sun, the four directions of the cosmos, or a portal to the Other Side. Thus, the motifs found in the fine lace of this wedding huipíl may well have been interpreted by the Maya as traditional imagery; this overlap embodies the idea of syncretism which notes how differing traditions may share important features.

The bride’s corte is more specifically known as a morga. It was made from a heavy, indigo-dyed material woven by men on treadle looms. Characterized as an older and “more traditional” style, morgas rarely include colors other than indigo blues and white. The colorful pink, purple, green, black, and white faja is very long, made to be wound around the wearer multiple times to highlight the amount of time and skill involved in its production.

Men also weave fajas, but use belt looms or foot looms, rather than the backstrap looms women use. Totonicapán belts are stiff and covered with beautiful, intricate brocaded designs, in this case predominately deer, women, birds, and plants (possibly maize plants), representing fertility and the cycle of life. This kind of imagery would have been particularly fitting for a wedding ceremony.