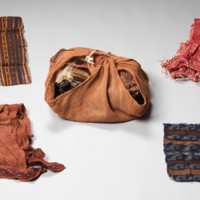 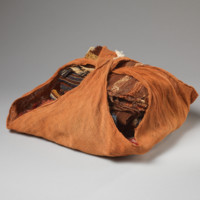 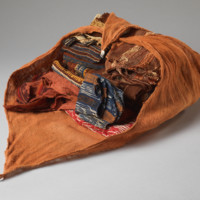 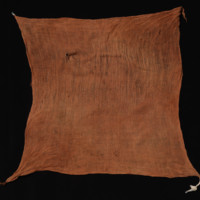 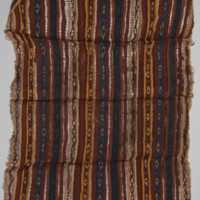 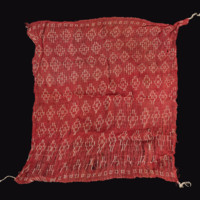 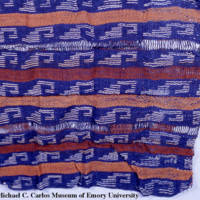 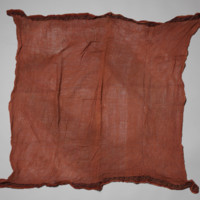 For millennia, Andean peoples have wrapped their precious objects in cloth, from mummies (the first ones in world history), to metalwork, to other cloths. Wrapping expresses the concept of ukhu, the importance of that which is hidden. Here nineteen miniature cloths were folded and tied up inside a larger cloth. This is a rare, over 600-year-old version of a q’epi, a bundle in which a contemporary shaman carries precious items to ceremonies, lays them out, and sometimes burns them as a sacrifice, or buries them as an offering to Pachamama, the Earth.

This ancient bundle may have accompanied a Chancay woman spiritualist on her afterlife journey: the dry sands of this area preserve miniature textile ensembles in women’s graves (along with textile workbaskets). Miniature textiles are also buried with fiber female effigies.

The inner cloths and outer wrapping mostly feature plain weave, a simple over-and-under technique, the wrapping cloth with a low thread count (only eighteen threads per inch in each direction). However, many have various added techniques, such as brocade, and contain high-status colors, such as red and blue. Even when the bundle is tied up fairly tight, the colorful protected pieces peek out from the covering cloth. This represents another aspect of ukhu: to know that something is hidden it is imperative that a little bit of it be perceptible.

Why is a complex topic, but the religious orientation of indigenous Americas, shamanism, dictates that hidden things are naturally more powerful. This is true of a shamans’ visionary enlightenment, achieved through trances that are not accessible to others. Yet hidden information must be revealed, as when a shaman shows what happened on the Other Side by healing a situation in this realm.