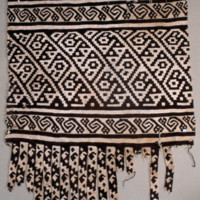 Every motif in this border fragment is either interlocked with another version of itself or is shaped so that it could be, which epitomizes the concept of interlockedness or reciprocity, ayni. Starting from the top are a band of curling snakes, their tails making a swirl where they meet and their triangular heads (with open mouths and eyes) facing down and up alternately. This band is repeated next to the fringe.

Between the snake bands, in the main design field, are diagonal rows of birds whose beaks face either up or down. Toward the top the birds are all brown with beaks up, a round head and concentric eye and two triangles for the body, wings, and tail. In the center, white birds face downward, their tails abutting the tails of brown birds above them. There is no background between the top and the center bird motifs. The lower row of brown birds face upward; however, in this case there is some intervening background between them.

The birds without any background between them embody is a perceptual effect known as “contour rivalry” in which the outlines are in a state of competition over which figure “owns” it. Looking at a brown bird it owns the edge of the tail, and vice versa looking at the white bird. It makes things even more challenging for the viewer that the next brown birds are not in contour rivalry with the white ones, but rather there is a space between the beaks. Expectations are met and then broken immediately, showing great sophistication on the part of the weaver.