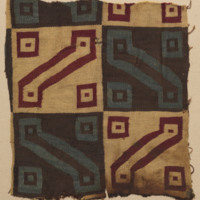 The Spanish destroyed as much Inka art and culture as possible during the invasion and colonization, melting down the precious metals and burning the royal mummies. Despite this, they admired Inka textiles, as Pizarro’s secretary Francisco de Xeres recorded in his memoir: “In this town of Caxamalca [Cajamarca] certain houses were found full of cloth, packed in bales which reached to the roof. They say it was a depot to supply the army. The Christians [Spanish invaders] took what they required, and yet the house remained so full that what was taken seemed hardly to be missed. The cloth was the best that had been seen in the Indies. The greater part of it is of very fine wool, and the rest of cotton of rich colours, beautifully variegated” (de Xerxes 1872, 60).

This small fragment of an Inka tapestry tunicis the kind of cloth de Xeres was describing, though not for the army, but a pattern reserved for upper administrators in the Empire. The pattern has four squares, with two of them connected by a diagonal line. It refers to the name for the Inka Empire, “Tawantinsuyu” or the “Land of the Four Quarters United.” This high-status qumpi includes 162 wefts and 28 warps per inch, and its indigo blue-green is likewise very prestigious and rare. The original tunic would have measured approximately 33 inches square.