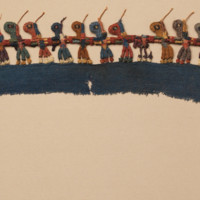 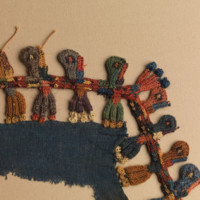 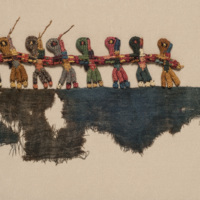 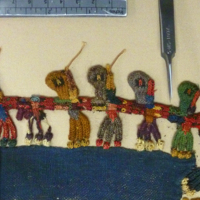 These fragments of an innovative and unique technique date to ca. 200 AD and were made by the Nasca. They originally belonged to the same mantle, but ended up in two different university museum collections: Emory’s (the larger fragment) and Duke’s (the smaller fragment). The conditions for the preservation of fiber are ideal on the dry desert coast of Perú, providing the longest textile record in the world. The blue plain-weave fabric was originally a large rectangular mantle.

Besides the prestigious use of indigo on the ground cloth, which embodies the concept of qumpi or finest cloth, the edging of charming and technically remarkable hummingbirds made of three-dimensional embroidery made this piece extraordinary in its time. A thick core of thread was sewn in looping stitches to make the three tail feathers, outspread wings, heads, and even long beaks (of which only the core thread remains) of the joined hummingbirds. The coloration accurately depicts the hummingbird’s beautiful iridescent feathers.

Likely a high-status Nasca woman wore this, the hummingbird being a symbol of weaving itself at this time. These tiny birds have a needlelike beak and fly swiftly, both forward and backward, so they represent dipping the embroidery needle into the cloth—like drinking nectar—and sending the threads rapidly back and forth to form the plain-weave ground cloth. In other Nasca embroideries, a hummingbird carrying a comb for beating down threads during cloth production appears as a female patron of weaving. Qumpi by definition was made by the most highly skilled textile artists, ones who made up such innovations as three-dimensional embroidery and wove quickly and surely, like a bird in flight.

Samples of green and purple threads were removed from the Carlos mantle fragment. Approximately 2 millimeters of each color thread were analyzed using Direct Analysis in Real Time mass spectrometry (DART-MS). This analytical approach enables solids to be analyzed without complex preparation. Therefore, dye analysis can be performed on very small thread samples without first extracting the dye, a laborious process that requires larger samples and risks contamination, loss, etc. The DART-MS analysis was performed by Dr. Ruth Ann Armitage, Professor of Chemistry at Eastern Michigan University. In addition to indigotin from indigo, the mass spectrum of the green yarn showed evidence of a flavonoid, either luteolin or fisetin, and its methyl ether; these compounds are found in a variety of different yellow dyes known to have been used in South America, including chilca (or ch'illka in Quechua, a yellow dye obtained from the leaves of Baccharis species). The purple thread contained indigotin from indigofera and several anthraquinone compounds (purpurin, rubiadin, and xanthopurpurin) that are indicative of Relbunium, a flowering plant in the Rubiaceae family that was used for red dye. Analysis of green, purple, and orange samples from the ancient textiles continues with the goal of further identifying colorant mixtures.