Openwork Headcloth with Bird and Snake/Feline 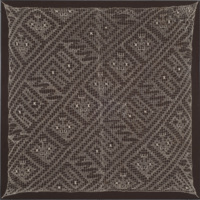 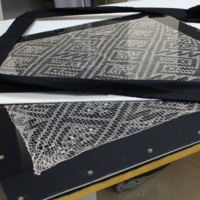 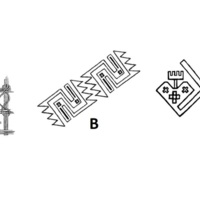 Openwork Headcloth with Bird and Snake/Feline

The textile artists of the ancient Andes, such as the Chancay of the central coast, invented nearly every known fiber-working technique, including the unique embroidered openwork seen

at left and right. While it may resemble lace, it is first loosely woven in an overall grid and then certain squares are crisscrossed with extra thread using a needle (Drawing A). This is all done with single-ply thread, the thinnest possible cotton that is spun in one direction but plied with another to make a strong, straight yarn. Single-ply thread is notoriously weak and tends to kink up, therefore it is rarely used and only by virtuoso fiber artists.

This piece embodies ayni, reciprocity, at all levels. There is a slightly thicker line up the middle, as if the headcloth were made in two parts and joined; however, it was not made that way, this illusion of duality merely follows the cultural imperative to have one thing that is really two.

There are two motifs but three different referents. All the figures have thicker x-shapes for their eyes. The birds represent the Peruvian Pelican (Pelicanus thagus) or the Brown Pelican (Pelicanus occidentalis), the characteristic long beak held diagonally. Two completely interlock with one another in pairs, their necks elongated and feathers abstracted into triangles (Drawing B). The other pattern has two readings: upright it is feline with pointed ears (the element coming up between them is a crest of hair characteristic of Pampas Cats); upside down it is a snake, with an open mouth and forked tongue (Drawing C). This cat-snake is a common motif in art of the Late Intermediate Period (1000–1470 ad). To have two basic motifs and then two readings of one of them

The headcloth is mounted directly under a plexi-glass cover that holds the lace-like weave open so that the pattern can be seen. Layers of padding on the aluminum support panel cushion the textile against pressure from the overlying plexi-glass cover. The dark brown fabric provides contrast to the undyed cotton threads. This mounting system replaces a previous pressure mount that was very large and heavy, constructed from solid wood and multiple layers of plexiglass. The new mounting system will house the textile in storage as well as for future examination and display.