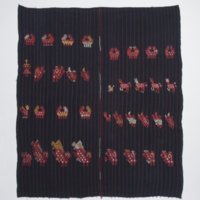 This seemingly innocuous blue cloth with animals in red and yellow embroidery is called a pisbal kotsih. It resembles many of the other general-purpose cloths used by the Maya to carry babies, food, place on the head to protect from sun and cold, and so on. However, an indigenous shaman uses this type of cloth to bundle up powerful ritual items, from flowers to candles to incense. It is then taken to special places to ask the spirits for help on behalf of his or her clients who are ill or having a problem such as infertility.

The items are natural (the flowers), Catholic-related (candles), and indigenous (pom incense), all brought together for their agency in carrying the client’s prayers to the ancestors and gods, who are believed to enjoy the smells and colors. Pisbal kotsih is translated as “carrier of prayer-containers,” the cloth as the carrier and the contents as the containers for the prayers. This is a very ancient way of interacting with the spiritual realm through objects, which were considered living bearers of thoughts and desires. Ancient Maya art shows many scenes with sacred bundles and people in trance states experiencing visionary creatures in the smoke of ritual items being burned.

These modern sacred cloths are decorated with large animal and occasionally human figures, some terrestrial and some supernatural. This example includes horses, felines, deer, monkeys, and tapirs, as well as double-headed birds and other potentially supernatural fauna. Running horses and rearing maned cats indicate the European influence, as the Spanish brought horses and no felines in the Americas sport manes. Yet, despite these decidedly European motifs, this type of bundle cloth was used well before the arrival of the Spanish, and certain animals relate back to ancient K’iche’ Maya origin stories and deities.

Post-Conquest, these shamanic cloths continue to be used in ritual contexts, often on festival days by cofradías, showing how they intersect with Latin America Catholicism. A shaman may even use his ritual bundle in the church, treating his client during mass, showing the intimate overlap of the two religions that persists to this day.