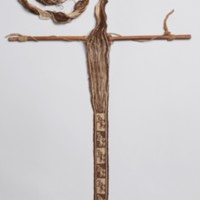 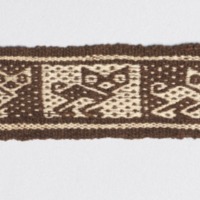 Only partially finished, this thousand-year-old belt was being made on a Chancay backstrap loom. It probably was still in process when its weaver died; it was a fairly common practice in various ancient Andean cultures to include unfinished textiles in burials, particularly those of women weavers. Presumably this means the weaver was believed to complete the belt in the afterlife or perhaps it was a gift that had to accompany its recipient under any circumstances. In traditional Andean thought death is a new phase of life taking place in the Beyond and “you can take it with you.” Indeed, graves are full of clothing, possessions, and status symbols for use on the afterlife journey.

This belt is made using the complementary-warp technique, which dominates the colonial and modern Andean textiles on view in the next gallery. Complementary-warp technique is less common in pre-Hispanic times, but clearly was mastered by the talented Chancay weavers. These diminutive cats appear in brown-on-white and white-on-brown; on the other side of the belt the patterns are exactly the same, but the colors are reversed. When brown warp threads are pulled to the front, white threads are pushed to the back in a reciprocal motion (expressing the key concept of ayni). The unwoven warps that stretch out from the loom bars alternate white and brown so that the weaver can choose which to foreground. This was to be a long belt, or perhaps a head wrap, according to the length of the unwoven warps. The delicacy of the weaving shows it would have taken many weeks, if not months, to complete.