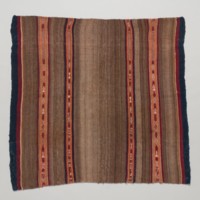 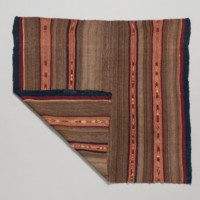 Incuñas or sacred cloths, like the example at left, may resemble a woman’s mantle, but are made and used differently. Indigenous people in Perú and Bolivia fill them with special items and lay them on the ground during important ceremonies, such as rituals to promote animal fertility. This is a very ancient practice. Graves from at least 300 AD include ritual bundles or cloths laid out with offerings of coca leaves, miniature ceramics, and gourds on top.

Today the items on such a shamanic mesa (Spanish for table, but meaning anything that presents sacred objects for ritual use) still feature coca leaves, which have always been a key feature of Andean ceremonies. Coca forms a link between the past and present, as the various coca bags seen in this gallery attest. Today coca is arrayed alongside cigarettes, herbs (such as chamomile), and molded sugar figurines. The various objects are symbolically shared with the spirits so as to encourage them to help the living.

Sacred cloths are special in way that is obvious to the highly textile-literate Andean peoples. One is the fact that it was woven as a single piece, whereas mantles and ponchos are always made from two parts.