Tumi (Ceremonial Knife) in the Form of the Sicán Lord 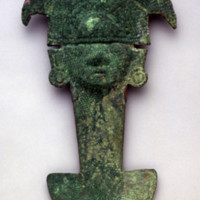 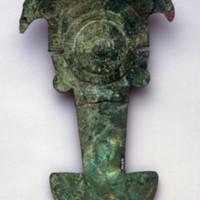 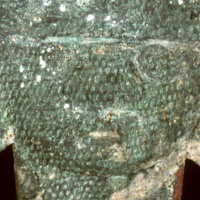 Tumi (Ceremonial Knife) in the Form of the Sicán Lord

It may seem odd that a textile exhibition should include several metal objects. However, this ceremonial knife with a crescent-shaped blade (known as a tumi) shows clear evidence of having been wrapped in textiles in antiquity. A later Inka tumi shows similar signs of textile wrapping; the distinctive pattern of a plain-weave cloth—each set of threads going over and under the other—is now preserved in metal. These “pseudomorphs”—meaning elements that have become part of a piece after manufacture—form during burial, when organic materials are either encased or replaced by corrosion products, retaining the form and appearance of the original materials within the mineralized layers. Pseudomorphs preserve the original weave structures, show the diameter and spin-ply of threads, and even suggest whether cotton or camelid fiber was utilized. This large knife in anthropomorphic form is almost completely covered with pseudomorphs, showing how completely it was wrapped. Sometimes fragments of the actual ancient cloth survive within the corrosion, as seen on earspools with spider motifs. This wrapping of other precious objects expresses the concept of ukhu, the dialectic of hiding and revealing so important in the Andean tradition.

Metal objects, (see also Llama Tumi and Earspools), corrode in burial environments due to exposure to moisture and salts in the ground. Some corrosion can be very destructive, causing loss of surface detail or extensive damage. Stable corrosion that forms on the surface can, however, be protective and may preserve evidence, including the weave pattern of textiles that were wrapped around the metal objects for burial. The textile is replaced by corrosion pseudo morphs that reproduce the weave. Close examination of the corrosion products on the large tumi revealed a weft-faced plainweave. The organic fibers of the textile do not typically survive, but some fibers remain trapped within the corrosion products on the earspools and llama tumi. Under magnification, using a stereobinocular microscope and transmitted light microscope, it is possible to see characteristic twist of cotton fibers.