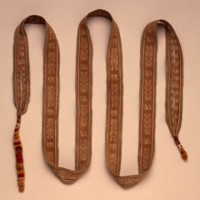 This belt dates from between 1000 and 1450 AD. It represents continuity within the long tradition of finely woven belts made in warp-face techniques. It is similar, but not identical, to the complementary techniques used in the 20th and 21st century. Made in supple cotton, still flexible after many centuries, its patterning features frontal figures with their hands out and elbows bent. This is the most common pose seen in Late Intermediate Period coastal textiles, especially those of the Chimú Empire. The elaborate and colorful tassels are also characteristic of this culture.